I was recently talking on IRC (with Kliment) regarding the advantages/disadvantages of Clonedel parts, and it turns out that a lot of work goes into making good molds that hold up and don't come out warped.

For instance, hex shaft on the Z-axis is needed to keep things level, the Clonedel's don't have this, I initially saw this as an advantage(and still kinda do until I start printing) because there had been preliminary reports of the top hex nut getting stuck in that shaft. Once I get the printer up and running I will find out how the Clonedel parts behave and they are any good (I think they will be OK).

In the meantime here is a blog entry from a German supplier called iFeel Beta of their gen2 Clonedel parts. They apparently worked very hard to get good quality parts cast. I recommend them as a source of Clonedel parts if you'r looking around and want to get started with a RepStrap.

Posted by Parallel Pilgrim at 12:22 AM No comments:

So the after a lot of looking around at hot ends I found out about the Acol hot end and its numerous advantages, the one thing that was attractive to me was the print nozzel resolution of up to 0.35mm. That pretty much sealed the deal, so after a brief correspondence with Laszlo about certain things I ordered an un-assembled hot end, a hobbed bolt and two thermistors.

As of this writing, Laszlo's site is not 100% up to date on how to assemble the 3.0.1 version of his hotend, but but the basic idea is the same. It seems he swapped out the copper cap with an aluminum heat sink that I think he made with a lathe, and this version is using different types of insulators, other than that no big changes. For more detailed pics on the new hotend check out his Flickr stream.

The pictures and steps below should help illustrate how to put the latest version of this hotend together. I couldn't have done this without the great work Laszlo has done for the reprap community, his hotend is very versatile and mounts on other printers as well. LulzBot also has a variation of his hotend that they sell which is worth checking out if you want to buy something from inside the US, both are excellent hotends.


1. First twist the wires around the thermisotr and resistor, then slide a ferrule bootlace over it and crimp it shut. then trim off any excess wire.
2. Set the thermistor in the heatblock, apply firecememnt and then insert the thermistor into the middle hole on  the heater block gently without it touching any aluminum, I smeared some firecement in the hole first to get this affect. make sure you screw in the nozzle and protect it with paper so you don't accidentally seal it with firecement.
While the firecement is drying you can assemble the rest of the hotend, here is an overall picture of how the pieces fit together in stages. 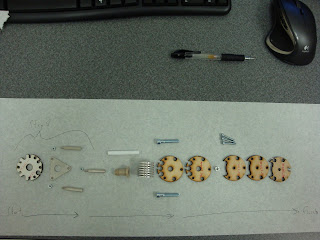 3. Here is the first part of the hotend body assembled, pretty straight forward, I just used my hands but if you have a 2.5 hex you can use that instead. 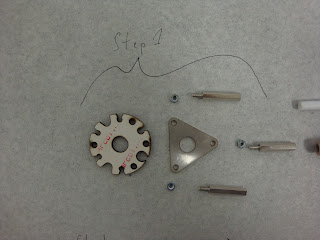 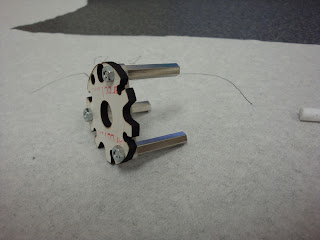 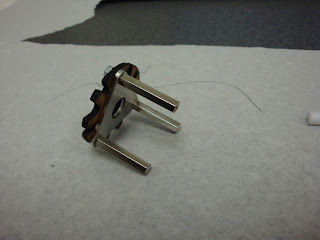 4. The next part is a bit tricky, the white PTFE tube is inserted in the brown PEEK block until the ends are flush with each other. 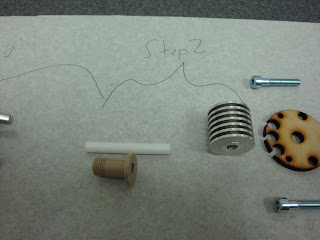 Then the you can slide the aluminum heatsink over it and put it into the front end of the body. 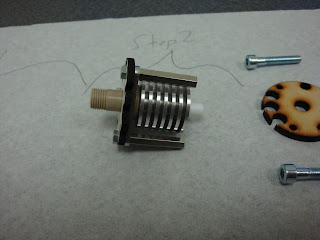 5. This is basically the last part, you're going to slide on 4 of those laser cut slices and then screw them on, two m4 screws will also go in, this is for mounting to the extruder, you will have one wood piece left over for mounting when you are done.

Take note of the alumunim ring in the bottom laser cut disc, this will be on the bottom layer and is to assist the plastic as it slides into the PTFE tube. 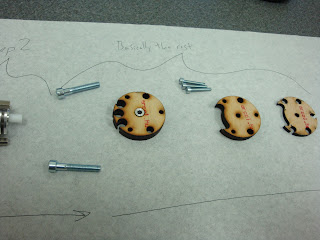 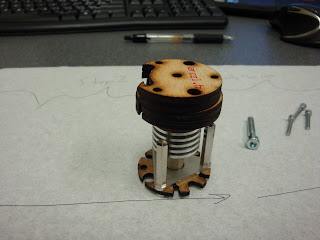 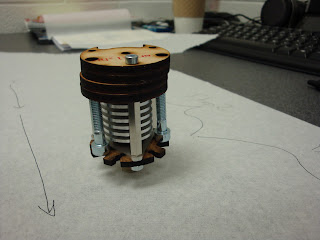 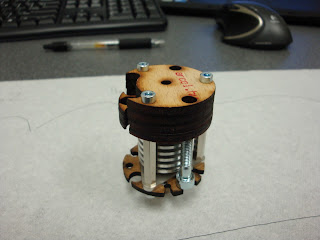 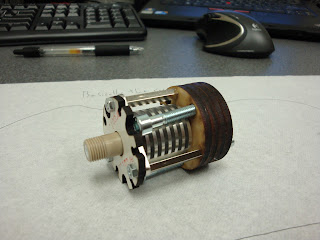 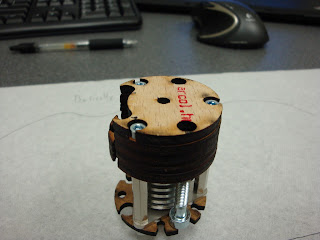 6. Don't forget to wrap you peek blocks thread in PTFE tape (also know as teflon tape or plumbers tape here in the US). This will help seal the

7. When your fire-cement is done drying (mine takes an hour, check your bottle) you are ready to screw teh nozzle onto the PEEK tube.

It is very important to make sure you have used PTFE tape on the PEEK tube and you tighten it as hard as you can against the nozzle because we don't want it to leak molten plastic :p

slide the wire covers over the exposed wire, use some more heatshrink wrapping if some bare wire is still exposed. I was kinda lazy and just used zip ties to secure my wires instead of all the fancy wrapping Laszlo did, I'm not as experienced as him :p 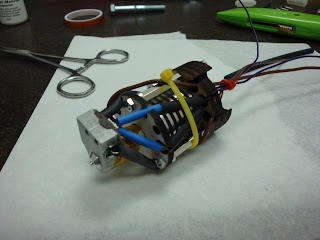 Wiring the RIGHT WAY (Laszlo): Below are pictures to walk you through the steps needed to properly wire up your hotend, provided by Laszlo on his Flickr stream. I was in a hurry and decided to use zip ties but as Laszlo pointed out to me, wiring up the arcol the right way provides 3 distinct advantages:


So learn form my mistake and try to do it this way instead, maybe when I test the resistor and heat up the hotend ill rewire it correctly and ditch the lameass zip ties ;) 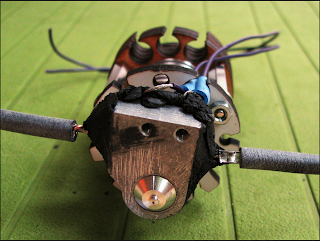 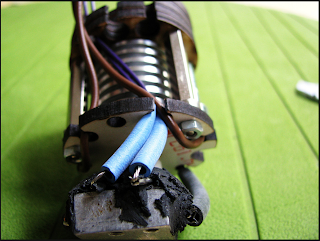 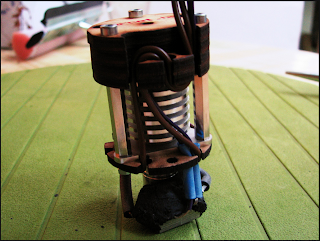 Instead of soldering on a molex connector as Laszlo does in his guide, i just extended my cables with butt-splices and added terminal ends.

Update: I added more firecement on the side to my resistor is completley covered, its not shown in this last picture, but its a good idea to do.

Part 2: I will remove that kapton tape and slowly heat up the resistor to 120C for 10 minutes, then 180C for 5 minutes, then 240C for another 5 minutes, after that the hot end will be done. Maybe ill rewire my hotend the way Laszlo say I should too....:p

Posted by Parallel Pilgrim at 1:34 AM No comments: